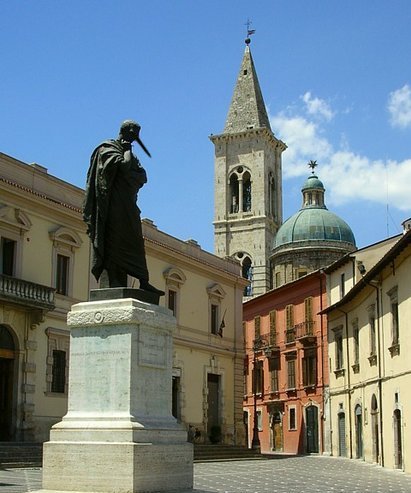 Brief retrospective of the historical events that affected the monument dedicated to the poet Publius Ovidius Naso (Sulmona, March 20, 43 BC – Tomi, 17 AD).

Step 1 – Work in progress: where to place the statue of Ovid?

First problems arose together with the necessity to choose the site that would host the statue of the poet. In the end, the chosen location had become the most central 20th September Square that after the demolition of the St. Ignatius church in 1900s was looking for a decorative structure of a strong symbolic value that would help regain the prestige one of the main town squares deserved.

The first initiative was promoted without any success in 1857 by Bourbon Captain Enrico Pianelli. The project was resumed in 1885, and the Vittorio Emanuele II Square was assigned as the preferred site for the statue. This attempt failed, too, and the War Memorial was installed there, instead.

In 1902 a new committee was formed that officially proclaimed the construction of the statue, the committee that could also count on the participation of the Municipality and some of Sulmona people living abroad, such as Nicola Grilli.

“[…] Due to the active involvement of S.E. Sardi, constantly contributing to the decorative improvement of Sulmona, and of the Municipal Administration, the desire that has been cultivated for many years is about to become true. Well-known master Ettore Ferrari has committed himself to giving Sulmona the desired Monument with the only reimbursement of expenses for raw material which, including a pedestal, are estimated by the sculptor at 20.000 lire.

Of this sum, around 6.875 lire are already in the City’s treasury, collected through various offerings, received for this purpose, and around 13.125 lire will be paid by the Municipal Administration.

Sulmona will, thus, have a remarkable work of art with a modest investment, and will fulfill a moral duty to its immortal son.

The monument will arise in the 20th September Square, and the Administration desires to inaugurate it on the next 21st of April, the anniversary of the birth of Rome.

The Council is called to determine whether the monument should be carved in marble or cast in bronze, and to authorize the spending of 13.000 lire.

The speaker, reporting the desire of many citizens, opines that the monument should be cast in bronze.

Opening the discussion, councillor Mr. Mazzini D’Eramo noted that master Ferrari would prefer to carve the statue in marble, thus being able to bring significant changes to the model of the already existing statue of Ovid that he cast in bronze for Tomis city. But if the statue to be cast in bronze, it would be ready by April, while, if to be carved in marble, would be finished only by September next year.

Advisor Mr. Giovanni Buffoni is of the opinion that, for a variety of artistic reasons that he will not expose because not everyone could understand, the statue should be carved in marble, taking into consideration it would honor a Roman poet and it is well known that a classical Roman statue has always been carved in marble.

Advisor Mr. Pasquale Centofanti, however, believes that the statue should be in bronze.

By sitting and standing, 14 Councillors vote in favor; Messrs. Buffoni, D’Eramo and Fabrizi vote against.

The Mayor proclaims his proposal approved, and the statue will be cast in bronze.”[1]

Step 2 – A sculptor for Ovid
The construction of the statue was entrusted to the Roman sculptor Ettore Ferrari who had already made a statue of the poet in Constanța, the ancient Tomis city of the Romans, in 1884. In Tomis the poet ended his days in exile, despite numerous requests for forgiveness addressed to the Emperor Augustus so that he could return to his homeland, and which bitter spirit penetrates the most melancholic work of the genius of Sulmona, The Tristia.

The initiative to build the monument had been taken by the prefect of Constanța, and the inauguration of the statue took place in the Rumanian city in the presence of advocate Raffaele Ognibene, representative of Sulmona.

On 20 April 1925, Sulmona welcomed the inauguration of its “genius loci” with a statue that is a kind of replica of the Rumanian statue but cast in bronze. An interesting fact is that His Majesty the King, who expressed a desire to personally attend the event, was present, while the sculptor (staunch Republican) was not. The official speech was given by Enrico Cocchia, Latin literature teacher at the University of Naples.

On the pedestal of the statue a plate with the verses from The Tristia is set:

“I who lie here, sweet Ovid, poet of tender passions,
fell victim to my own sharp wit.
Passer-by, if you’ve ever been in love, don’t grudge me
the traditional prayer: ‘May Ovid’s bones lie soft!”[3]

Beyond the artistic and literary value, the Ovid Statue is outstanding from a symbolic point of view, not being a simple tribute to the poet but, as well, a display of the local culture that is expressed through its most famous representative.

Walking along the empty streets of Sulmona, during those hours when they are not crowded by its inhabitants, I can fully feel and enjoy the city. I am invaded by the feeling of being a tourist, a stranger in her own land, with no other aim than interpreting the cryptic signs left by the tide of time on the face of the old town.

And with this lightness in the heart I walk down the little streets.

Like a flaneur I lose myself in them, for the first time I raise my eyes to see what is around me, being far from indiscreet, judging, and questioning glances, I notice details; my town unveils itself to me and my eyes cross his. That statue, that thoughtful man made even more pensive by the tide of time that gave him a sense of irrelevance to what surrounds him, now that the Grand Cafè does not attract clients anymore, now that the 20th September Square forgot the afternoon crowds with their freedom of gossips, fantasies, polemics, pleasant conversations, and greetings, now that even the Ovid Classical Gymnasium moved from its original location, even more I wonder what that old man would think of his own native town, of its inhabitants, and their choices – of modern times.

No direct answer could be found, Ovid ceased to sing his verses, he is no more, but he has not stopped talking to us. And he does it through his simulacrum, his books, art, through literature – the only thing being able to describe, sublimate, and bring back its true meaning to life.

Sulmona Ovid Statue Click on the map for a bigger version

Publius Ovidius Naso, “The Tristia”; translation by Peter Green, The Poems of Exile: Tristia and the Black Sea Letters (University of California Press, 2005).

Ovid Statue by Antonella Capaldo translated by Yulia Shcherbakova is distributed with the licence Creative Commons Attribution-NonCommercial-NoDerivatives 4.0 International.
Further permits in regards with the purposes of the present licence can be available via https://www.sulmonalive.it/contattaci.