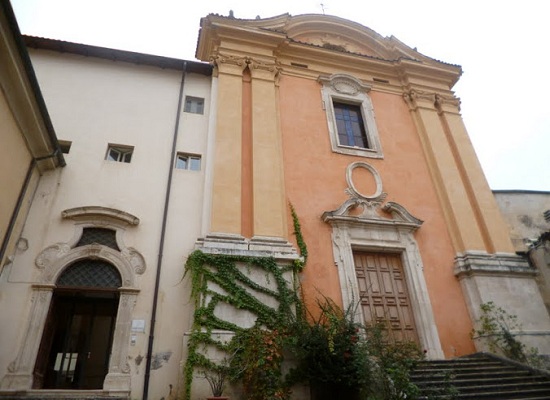 The Diocesan museum of sacred art

The Diocesan museum of sacred art is located in the monumental complex of the former St. Clare Convent.

The Convent is situated in the main town square – Garibaldi Square (Piazza Garibaldi) – next to the St. Clare church.

It was founded in 1269 by Florisenda from Palena and now represents one of the most ancient examples of convents. It went through various phases of development and destruction, the most notable being the one following the earthquake in 1706 that severely damaged a great part of the town and its most important monuments.

Following the two laws issued after the Italian unification, the Royal Decree no. 3036 of 7 July 1866 that suppressed some religious Orders and groups (executing the law no. 1987 of 28 June 1866), and the law no. 3848 of 15 August 1867 proclaiming the sale of the ecclesiastical patrimony, the monastery of St. Clare faced definitive closing in 1866 and was destined to different uses throughout the following years.

The convent extended over two floors – a parlor (the only contact of nuns with the outer world), an internal chapel, a kitchen, cellars and other service rooms occupied the ground floor, while a dormitory and a convent school were placed on the upper floor.

The restoration works, aiming to give the building its original structure back, affected by different works overlapping each other through the centuries, touched, above all, the ground floor; in the inner courtyard (dated 1518), a radical work that changed the colonnade is clearly visible.

The civic-diocesan cultural center of Sulmona was placed in this part of the former convent and it is composed by the Diocesan Museum of Sacred Art, the town gallery of modern art, and by the Diocesan library where in a reading room it is possible to look up texts and magazines dedicated to the local history.

Composition of the Diocesan Museum of Sacred Art

The Diocesan Museum of Sacred Art occupies the rooms of the former refectory and of the inner church.

Two exhibition rooms are located in the former inner chapel, the first being dedicated to the works of 12th-14th centuries, and the second holding the works from 16th-18th centuries.

In the first room, during the restoration works, some nouns’ sepulchers were found – later this custom ceased to exist with the Napoleon’s St. Cloud Decree, issued 12 June 1804, forbidding burials within city walls, for sanitary-hygienic and ideological and political reasons. One of the most important aspects of the room is a series of frescoes from the 13th century, nowadays visible only partially but originally probably covering the entire inner chapel, displaying episodes of Christ’s and St. Francis’s lives.

Among the most notable works there are a silken drape made of two pieces sewed together and a well-decorated chasuble[1] made of white silk, golden brocade, and taffeta, displaying exotic elements like elephants, gazelles, and two-headed eagles. The latter was found together with a pair of leather boots and a red silk bag, which, according to the tradition, contained the bones of St. Panfilo.

In the room, jewellery is exhibited, too – one could see, for example, a gilded silver chalice decorated with a transparent enamel. It bears a name of the artist, Ciccarello di Francesco di Bentevenga, and the Sulmona’s seal used in the second half of the 14th century.

Among the polychrome wooden sculptures there is a statue of St. Catherine, coming from the basilica of St. Maria del Colle in Pescocostanzo town, being an example of the french Gothic influence spread through the areas of Naples and Orvieto.

Numerous paintings on wood and canvas are present, some of them are attributed to the so-called “Master of Caramanico”, anonymous author that distinguishes himself by the style that recalls an art influence of Tuscany and Marche regions, with bright colors and plastic figures with undefined contours.

The last room that once served as a refectory of the Poor Clares houses silver pieces and liturgical furnishings, representing the Treasure of St. Panfilo grown over the years thanks to the donations of the local noble families.

A wide collection of sacred vestments of 15-19th centuries is also present.

Worth of notice is the presence of several manuscripts, among which, of remarkable importance, there is a missal, chronologically attributed to the period between 1255 (the year when Saint Clare was canonized) and 1264. The book is one of the oldest Franciscan codes that outlived the dispelling of the legends regarding St. Francis, which went authorized by the Paris Chapter after the conflicts emerged within the order.

The Diocesan Museum of Sacred Art with its historical and artistic heritage, other than being a proof of cultural richness of this area, plays a socially relevant role by representing the voice of collective heritage and the concept of both intelligible and culturally committed art (art able to place itself in the tradition by connecting past, present, and future). It recalls in each of us that “metaphysical reservoir” (made of knowledge, values, and traditions) that stands at the base of our roots and our belonging to this land.

[1] chasuble nf [from late latin casŭla, diminutive of “casa” – hut, cabin]. Ancient name of a sacerdotal vest, wide and bell-shaped, with a single slit for the head from which it is put on, used until the 13th century and then reintroduced under the same name in a new liturgy, for the celebration of the Mass. (Translated from Treccani encyclopedia.)

The Diocesan Museum of Sacred Art by Antonella Capaldo translated by Yulia Shcherbakova is distributed with the licence Creative Commons Attribution-NonCommercial-NoDerivatives 4.0 International.
Further permits in regards with the purposes of the present licence can be available via https://www.sulmonalive.it/contattaci.