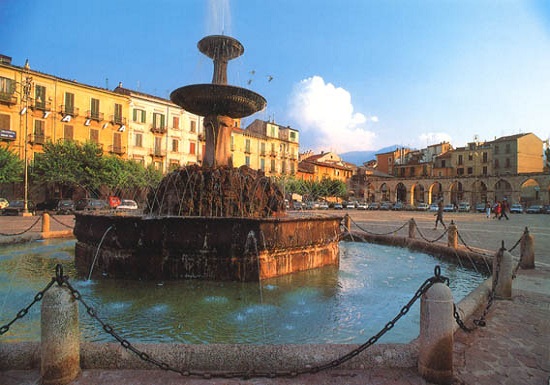 The Big Fountain (Fontanone) located in the center of the Garibaldi Square (Piazza Garibaldi) was added in 1823.

In order to insert it in the square some radical changes had to take place, including the demolition of a part of the wall, limiting the access to the entrance of the square, with the consequent extension of the pipeline to the fountain.[1]

Guido Piccirilli, the historian, has left us a curious anecdote according to which:

“The pitch that finds itself beyond the three arches of the aqueduct bore the name of the fish square. Next to it there was a large slab of stone called the staffo. Those who would not or could not pay the debts, in order to be discharged by the Magistrate, had to hit that slab three times with a certain naked part of their body in broad daylight. The story is told by our old and deserves to be believed, because the stone of staffo is not only mentioned in a document of the 16th century, but it has left a specific saying in popular culture: “A certain person not to pay his debts beat his … on the staffo stone”. Now this plate was the one that served as the great basin of our fountain.
According to the drawing that no longer exists in the Town Hall’s archives, four dolphins should have leaned against four streams of water, with their heads on the rocks and kinked tails supporting the monolith’s basin. The work, therefore, was not brought to completion.”[2]

The Big Fountain by Antonella Capaldo translated by Yulia Shcherbakova is distributed with the licence Creative Commons Attribution-NonCommercial-NoDerivatives 4.0 International.
Further permits in regards with the purposes of the present licence can be available via https://www.sulmonalive.it/contattaci.