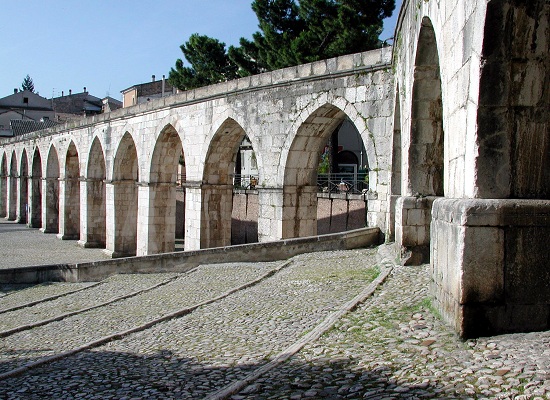 Under the reign of Holy Roman Emperor Frederick II the town, due to high consideration of the sovereign regarding it, in fact, reached its peak in the commercial and artisan spheres, as well as in arts, and held up to this achievement through the establishment of a regional Giustizierato, a Canon law chair, and one of the seven annual fairs of the Kingdom.

Nevertheless, it is quite a difficult endeavour to find traces of this period, as a series of fortuitous-and-not events (the revenge of the House of Anjou, the inexorable passage of time, the carelessness of humans) has helped erase everything that could have served as evidence of this period of splendor and the memory of a great monarch.

Traces of the Swabian history remain, most of all, in the written papers – the archives of the Sulmona Cathedral (Cattedrale di San Panfilo), in fact, preserve an important collection of scrolls of the Swabian period.

Among the works of art survived to remind us about this period of a great splendor there is a monumental medieval aqueduct.

The medieval aqueduct of Sulmona

The construction of the aqueduct of Sulmona dates back to 1256, under the reign of Manfred King of Sicily (son of Frederick II).

Practical and functional reasons lied at the basis of the construction project. The aqueduct was intended to carry the waters of the river Gizio to the town in order to perform a dual function – to feed the cultivated soils and to provide a significant source of energy for artisans.

The construction of the aqueduct required a great use of resources, and in the eyes of citizens, visitors, and foreigners it became a symbol of prosperity that had made Sulmona a notable town.

“The aqueduct of 1256, a splendid example of medieval engineering, unfolds itself in three segments significantly different one from another in terms of lengths: the first one is 76.1 m. long and consists of 15 pointed arches supported by piers at intervals of about 5.10 m., the second is 24.38 m. long and includes 5 arches having both the same pier-to-pier distance and shape as the previous one (except for the two closest to the Fountain of the Old Man that are approximately 90 cm. narrower), and the third is only 4.92 m. long and consists of the sole last round arch with the pier end that gets confused for the structures of the Fountain of the Old Man.

The difference in height between the first and the last point (the entire current going over the number of arches is approximately 106 m. long ) equals to 1.65 m., but in the first section water comes down only by 70 cm.

An accurate survey showed that the piers, square-shaped with sides from 1.27 m. to 1.32 m. and the minimum and the maximum distances between them of 2.92 m. and 3.85 m. respectively, are not perfectly aligned. They rest on the bases of different heights that are 10 cm. wider on each side than the piers themselves, and are topped by molded frames at imposts of the arches.

The channel, which is currently covered by concrete plates, represents a trapezoid section 0.34 m. in height with the bases of 0.30 x 0.50 m. – the dimensions and the shape that allow a maximum discharge capacity of almost 130 liters per second, which equals to 468 cubic meters per hour, more than 11,000 cubic meters per day[1]“.

This way water could be taken from the river Gizio, via the “Great Form”, and directed into the river Vella[2].

These highly technical data provided by engineer Fulvio Di Benedetto, invite us to reflect on the difficulties that an execution of such a complex and majestic piece of work had to represent at the time, and on the fact that it happened to be possible only through the joint efforts of the population and local institutions.

The aqueduct consists of 21 pointed arcades in ashlar stone called “The Colossi”. Between the 7th and the 8th arches there is a plaque with the leonine verses in Lombard characters:

(The river runs here;
look at the sublime quality of this imperishable walls.
Merit of Sulmona people whose diligence
helped to execute, leading to this form,
through Durante’s art,
useful ornament of the town.)

A truly singular piece for that era is the presence of the architect’s name, Durante, in the closure of the epigraph.

It is believed that the last arch, just near the Fountain of the Old Man, may have been built at a later date, as it is different from the others (usually considered to be the result of successive restorations).

The quality of the work is evident from the fact that the arches and the overall structure remained almost intact despite the multitude of earthquakes that struck the town, including the most devastating one of 1706 that forced many changes and restorations.

In 1962 the constructions that had been covering one half of the aqueduct were removed (thanks to the contribution of the Fund for the South – the Cassa del Mezzogiorno).

The aqueduct, although today it has lost its functionality, never ceases to amaze both from a technical point of view, as a perfect example of engineering, and by its artistic value.

This is, in fact, one of the most striking works of art in the town.

Thanks to a beautiful and elegant staircase – work of stone-cutters from Lombardy – anyone who walks along the Corso Ovidio can have an access to the Garibaldi Square, may have a pleasant stop near the Big Fountain, from where they could continue their visual journey to the inhabited center and then to the Morrone mountain that stands in front of the aqueduct, embracing this way art, history, and nature all together.

Sulmona Medieval Aqueduct Click on the map for a bigger version

Sulmona Medieval Aqueduct by Antonella Capaldo translated by Yulia Shcherbakova is distributed with the licence Creative Commons Attribution-NonCommercial-NoDerivatives 4.0 International.
Further permits in regards with the purposes of the present licence can be available via https://www.sulmonalive.it/contattaci.