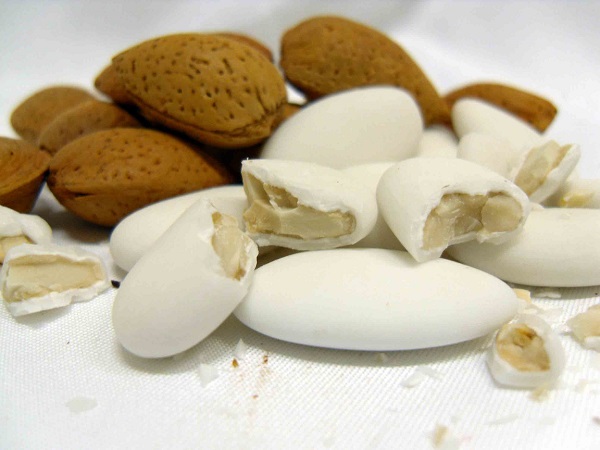 One of other glories of the Peligna town along with Ovid is famous “confetti di Sulmona” – sugared almonds.

Favored by the Roman emperor Tiberius and praised by Boccaccio, the confetti of Sulmona have been always used to celebrate the most important milestones of one’s life, as a symbol of greetings and best wishes.

Confetti in the history

According to multiple historical pieces of evidence, confetti were used mainly by the elite, in the families of a noble origin, as presents on feasts and anniversaries. For example, Roman patricians used a variant of the confetti to celebrate births and weddings – instead of sugar, almonds were covered in honey and flour.

In its original variant, confetti consist of an almond core, covered in a layer of white sugar.

The most precious type of the almond is the one of Avola (Sicily) that is, due to its oval and flattened shape, lets refined sugar wrap the almond up, giving life to refined confetti with a characteristic traditional taste. Its main competitor is the round California almond.

Commonly, they are distributed at the end of ceremonies inside the decorated bags called bomboniere – party favors (from bonbonnière – fr.), as gifts for the guests, who by coming made a present to the hosts.

In the confetti tradition, the numerology is also important.

Inside bomboniere there is usually an odd number of confetti, and it varies from five to three and one.

The number five refers to the wishes of fertility, long live, good health, wealth, and happiness; the number three symbolizes a couple and a child, and the only confetto represents the uniqueness of the event.

When we talk about confetti, color also has its importance. In fact, more than 50 different types of them exist to celebrate various events.

White is a traditional color of confetti.

This symbol of the perfection of the purity comes appropriate for celebrations of a special moment in a life of a human being – giving oaths. 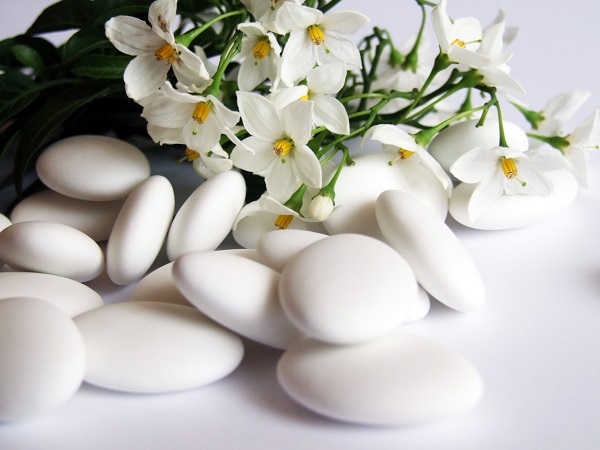 The white confetti are used for weddings, and the two halves of an almond symbolize a lasting union of the couple, halves kept together by a thin layer of sugar, but at the same time strong enough to hold one next to another.

Among the most popular ones, there are pink and blue confetti, used for birth, baptism, and first communion celebrations, for a girl and a boy, respectively.

The pink confetti can be also appropriate for the first anniversary celebration, being ideal for the young spouses who would like to renew and strengthen their bond, as a wish of a long and happy life together.

The red confetti are particularly indicated for a university graduation celebration. The red color, in fact, obtains multiple meanings, for example, those of strength and courage, but also symbolizes love and passion, and for this reason these confetti are also used for the 40th ruby wedding anniversary.

In Sulmona you can find not only traditional confetti, a vast number of variants exist, for example, those with pistachio nuts, hazelnuts, fruits, or chocolate instead of almonds. In these cases, we have a mix of merry and colorful confetti, particularly suitable for birthday celebrations.

The green confetti are preferred for special events, such as an engagement, or the 55th emerald wedding anniversary.

Together with the canonical and important milestones of the 25th silver wedding anniversary (silver colored confetti) and the 50th golden anniversary (golden confetti), it is common to celebrate other dates in the family history, too.

Traditionally, the bomboniere with yellow confetti are prepared for the 15th crystal anniversary, and the ones with beige confetti – for the 20th china one.

In addition to the wedding bomboniere, confetti of Sulmona can be seen in an ancient popular tradition, diffused all over Italy – il lancio dei confetti, “the launch of confetti”.

At the steps of the church, guests expect newly-weds, who, when crossing the doorstep of the sacred building, find themselves under a shower of rice and confetti, as a symbol of good wishes and a sign of participation in the birth of a new union.

In some municipalities of Abruzzo, for example, in Campo di Giove, according to the tradition, the mothers of the spouses throw rice, confetti, and money out of the window before the beginning of the wedding ritual. Later, it is the spouses’ turn to obey to the same tradition. During all this merry ritual, all the children of the town gather to try to grab the biggest number of coins.

Birth of a modern confetto and first confectionery factories

The history of confetti takes a turn when sugar invades Europe, imported by the Arabs. In 1400s it begins being used in the production of these sweets on a regular basis, advancing the development of confectionery factories, centers specialized in an artistic production of confetti. This gives an impulse to a long confectionery tradition that finds in Sulmona one of its biggest production centers. The production of confetti in Sulmona was located in the monastery of St Clare, where, due to a particular technique, confetti were used to give life to decorative motives, such as flowers, spikes, bunches, rosaries, etc.

The leader of the sector is the highest standard Mario Pelino confectionery factory that produces famous Sulmona confetti since 1783. The Museum of the art and the technology of confetti is located nearby, where relics, machines, and all the tools, nowadays rare, are exhibited.

Everywhere in the town, mainly along Corso Ovidio, you can find shop that offer artistic and colorful compositions from the unique confetti.

Sulmona Confetti – History, qualities, and traditions by Antonella Capaldo translated by Yulia Shcherbakova is distributed with the licence Creative Commons Attribution-NonCommercial-NoDerivatives 4.0 International.
Further permits in regards with the purposes of the present licence can be available via https://www.sulmonalive.it/contattaci.