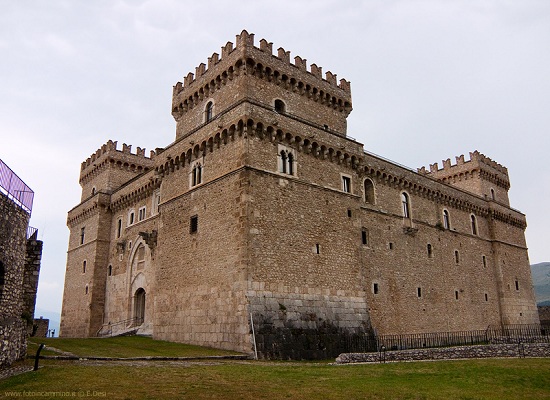 Proud and noble castle, once the cornerstone of the area, continues to dominate over the entire valley from its high position.

Entering the interior rooms (which now house the National Museum of Sacred Art of the Marsica) and approaching old windows, one could see the landscape that makes one realize the strategic importance of the fortress watching over the vast territory of the Fucine valley made of roads, fields, and towns that was once entirely covered by the waters of the lake.

The drainage of the Fucine Lake

The first one to take the initiative was Julius Caesar but the project was halted by his death. Later, the Emperor Claudius continued the venture authorizing the reclamation works, which required a large deployment of resources and, especially, of slaves and human lives. This is what we witness in the words of Suetonius, a Roman writer of the Imperial era, “He made the attempt on the Fucine lake as much in the hope of gain as of glory, inasmuch as there were some who agreed to drain it at their own cost, provided the land that was uncovered be given to them.”[1]

When the works were completed, a date for the inauguration was set when the success of the project should have been shown. During the ceremony, however, due to some errors in the excavation, water diverged towards the wrong section of the tunnel giving rise to a strong “water hammer” that brought down a section of the gallery itself. The emperor, to mask the failure of the works, gave the order to organize a bloody naumachia (naval battle) where the slaves, before the fight, marched in front of the emperor greeting him by “Morituri te salutant” (“Those who are about to die salute you”). That day did not leave other tangible evidence except for the red waters of the lake where hundreds of lives were put to an end for the whims and the vainglory of the Emperor.

In 1854 the endeavour (which continued to be pursued over the centuries) was resumed and completed by Alessandro Torlonia that gained him the title of the “Prince of Fucine”. The project was carried out by using what at the time represented a great work of hydraulic engineering – an ovoid-shaped tunnel. The works were finished in 1875. The drainage of the area gave access to fertile soils, hidden for centuries under the swampy waters of the lake, that could be finally used for their true purpose[2].

The Piccolomini castle underwent several transformations in the course of the years that have altered its original nature.

It was initially born as a military construction and a defense point to protect the imperial feudal forces from those belonging to the Emperor Frederick II of the House of Hohenstaufen who in 1223 laid siege to the fortress of Celano and destroyed the village, dispersing this way the population (they later formed a new settlement, protected by a wall line and a new fortress)[3].

The present castle was most likely founded by Pietro De’ Berardi, the Count of Celano, around 1392, and later in 1451 Lionello Acclozamora constructed a “noble floor” – residence for the lords. With Antonio Piccolomini, who in 1463 was appointed the count of Celano, the castle took on a function of a residence used to house the court. Over the years, the building housed several families, such as the Sforza-Cesarini and the Dragonetti who kept its structure substantially intact.

The earthquake of 1915 caused serious damage to the structure. The restoration works took place in 1940-1960, with a suspension during the Second World War, and were carried out with the scope of reconstructing the missing parts of the castle in an accurate way[4].

The castle consists of a first outer wall line fortified with square turrets and, later, truncated cone-shaped towers to allow flanking fire. The wall goes around the central structure of a rectangular shape, with four corner towers long sides of which face north and south, and the shorter ones face east and west.
Inside the rectangular structure we find an elegant inner courtyard presented by a two-level Renaissance colonnade, the lower level is formed by ogival arches and supported by large column-shaped pillars, the top one has a double number of round arches with smaller columns. In the middle of the courtyard a well is positioned that was used to collect rain water via an underneath cistern.

The entrance to the castle was made possible through a drawbridge that goes over a now dry moat, from where one could continue to the two entrances – the first has two segmental arches and one that can be described as a pointed arch, while the second, more ancient one, is presented by one ogival arch with a machicolation on top of it[5].

The National Museum of Sacred Art of the Marsica

The castle houses the National Museum of Sacred Art of the Marsica, which is divided into two sections – section of the Sacred Art and the one of Archaeology.

The first, located on the main floor, is divided into eleven rooms and several sections – sculpture, painting, jewelry, and religious vestments.

On 10 May 2003 the archaeological section, coming from the “Torlonia Collection”, was added, where one could observe objects of a various nature but with the same origin. They are, in fact, finds that had been discovered following the reclamation of the Lake Fucine by “Prince” Alessandro Torlonia (in honor of whom the town of Avezzano built a bust facing the direction where the lake once was).

The collection is composed by jewelry, weapons, items used for battles, agricultural tools, and tools for fishing. Among the most important pieces there are the bas-reliefs with, unfortunately, only a few fragments remained. The importance of these architectural decorations lies in their valuable contribution to the reconstruction of the lake-area scene of the time. Among the images we find a colonnade of the temple, men navigating the waters of the lake in the traditional boats of that period, and workmen in the process of reclamation of the lake.

Those who have an opportunity to visit the castle can receive more detailed information from the museum guides, able to explain, among other things, how this reclamation has caused a radical change that affected not only the landscape but the climate, turning it from mild and moderate (the reason why the area often served as a “resort” for the Romans) into a mountain-like.

Guests can as well visit some tombs with skeletons of a man and a woman who were found together with all their “funeral supplies”, including pieces of jewelry, some of which are ancient and made of bronze, and others are more recent – in gold and natural stones. In one of the tombs, a skeleton of the pig with a leash was also found, giving suggestions of its use as a pet.

Overall, the castle of Celano gives any visitor an opportunity to spend a day among art, history, and culture, a chance to walk in the historical center of a small village that surrounds the fortress, giving back to it the vital force of its centuries-old past.

Every day except Mondays: 9 am to 7 pm.
Ticket office closes half an hour before.

Free entrance for visitors until the age of 18 and over 65
Reduced ticket 1€ – visitors 18-25 years old
Full price ticket 2€
Free entrance for teachers and students of the Architectural department, Preservation of Cultural Heritage, Literature and Philosophy with Archaeological and History and Arts orientation, Academy of Fine Arts, for tour guides and interpreters.

Guided tours organized by the Academic Office:
Tuesday-Friday with appointment:
tel. and fax 0863-792922

Piccolomini Castle – Celano Click on the map for a bigger version

Piccolomini Castle by Antonella Capaldo translated by Yulia Shcherbakova is distributed with the licence Creative Commons Attribution-NonCommercial-NoDerivatives 4.0 International.
Further permits in regards with the purposes of the present licence can be available via https://www.sulmonalive.it/contattaci.