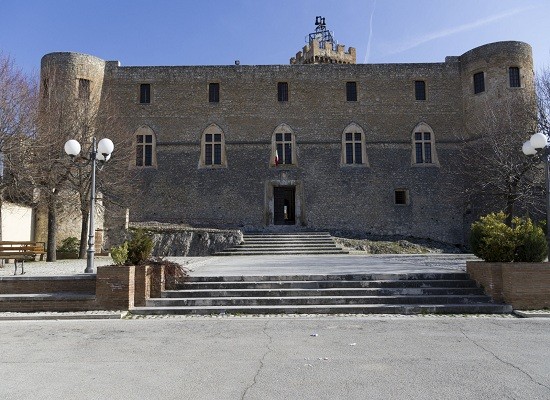 The castle of Capestrano was built in the 12th century in a position dominating over the whole plain of the river Tirino – area rich with water resources and defensive systems that are integrated into the urban fabric.

The castle is linked to the destinies of major dynasties that had existed until the abolition of feudalism – the Dukes of Acquaviva from San Valentine, the Piccolomini and, in the end, the Medici.

It was King Charles I of Anjou to pass the property over to Richard d’Acquaviva in order to honour him for the support he had in the conquest of the Kingdom of Naples. The fortress withstood several attacks, and in 1463 passed to the hands of the Piccolomini family following the marriage between Antonio Todeschini Piccolomini, Duke of Amalfi, and Maria of Aragon, daughter of the king of Naples. Later the castle was bought by the Grand Duke of Tuscany, Francesco I de’ Medici, and in 1783 passed over to Charles III of the Spainish Bourbon dynasty[1].

Nowadays the castle represents a 15th century structure (work of Antonio Piccolomini made around mid 1400s) united with a previous fortification, from which a large square tower is left, oriented differently in comparison to other remaining parts. The facade, bounded by two cylindrical towers, with the restoration works of 1924, underwent radical changes that had also tampered with the interior spaces. Windows were also constructed, with the purpose of illuminating the interior area, which now hosts the Town Hall, and the entrance surmounted by the emblem of Piccolomini (representing five half moons with a crown on top), overlooking a fascinating 18th century square.

The old entrance to the castle was located on the opposite side, with a drawbridge allowing to cross the moat. What is now left from this ancient entrance in a ravelin, mounted as an access’ defense of the castle, and the holes from the chains of the drawbridge that got replaced by a stone staircase.

Among other defense elements of the fortress it is possible to name some parts of the battlements and the bartisans[2].

The castle houses a picturesque Renaissance style inner courtyard that is flanked by marble columns with leaf-motif capitals connected by an architrave.

Despite the interventions that have altered the original appearance of the castle, it remains one of the most distinctive examples of fortifications in Abruzzo.

[2] A parapet with battlements projecting from the top of a tower in a castle or church. (From http://www.yourdictionary.com)

Capestrano Castle Click on the map for a bigger version

Capestrano Castle by Antonella Capaldo translated by Yulia Shcherbakova is distributed with the licence Creative Commons Attribution-NonCommercial-NoDerivatives 4.0 International.
Further permits in regards with the purposes of the present licence can be available via https://www.sulmonalive.it/contattaci.